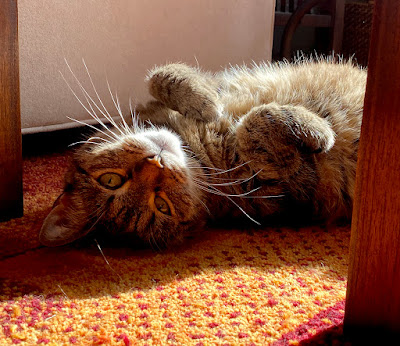 LucyFur's take on today is a lot more relaxing than my own - or, probably, than yours.  Enjoy that curl of the paws.

another bunch of wildflowers 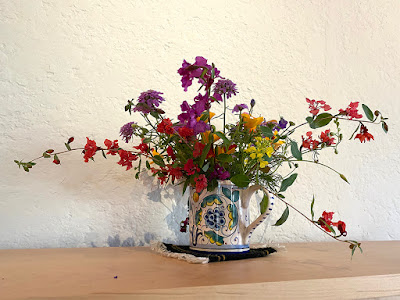 Our cell phones screeched into life as we were having dinner, to tell us that as from eight p.m. - a quarter of an hour ago - we are under curfew.  We were outside, with yesterday's bunch of wild flowers - these ones, gathered this morning, are in the living room.  The mowers didn't come today; they'll arrive at 8 in the morning.  Outside, police sirens are going off, and, in territory-defining unison, the coyotes are howling.  On TV, looting on Melrose, at the same time as so many among the protestors are urging calm; being quietly arrested (for curfew breaking, by now): all my sympathy is with the organizers, and what they represent by way of peaceful, principled protest.  And more: how glad I am to live in a city where the mayor commends the justness and appropriateness of just such protest, with the support of many community leaders, and indeed the Sheriff, saying exactly the same thing.

There's a strange piece of sartorial synchrony: little did I think, when pulling a scarf over my face to avoid being badly teargassed in the streets of Paris in 1973 (manifestations contre la loi Debré ...) that face masks would be de rigeur for being outside ... 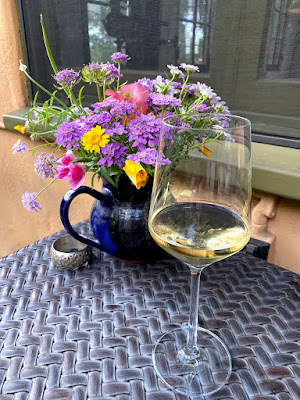 Tomorrow is the day of the brush clearance, so I gathered a whole jugful of wild flowers - sitting, here, on the balcony table at dinner time.  I don't think I can bear the scything of the most beautiful part of the crop, however, and I have some stake-fences and yellow Do Not Cross tape ready to put in place tomorrow.  Surely a three foot by ten foot stretch of wild beauty might pass muster as a deliberate flower bed? 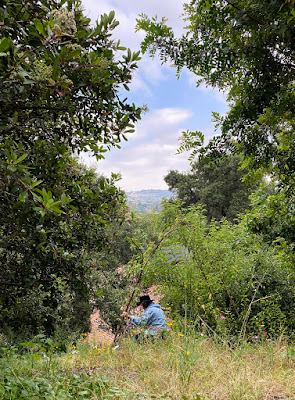 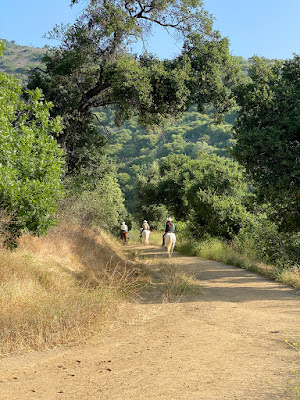 It's hard to believe that these views are ten minutes walk or so from our house ... especially the second one, which is like a country lane in rural England ... (mind you, these images are silent: there's a dull background roar of the 5 freeway, truth be told).  Our house is just hidden away, in the row of trees on the right-hand hill: what stands between the lane and it is the Junior Golf Academy, which even had a couple of (non-Junior) golfers at the driving range today.  The horses?  I don't know - they may have come over the new bridge (over the 5) - it was early in the morning (hence the haziness), and I was super-envious of them ... it was a very welcome walk before a dreadfully long day of meetings and admin.  Is it possible to be working harder now than during the semester?  Seemingly so. 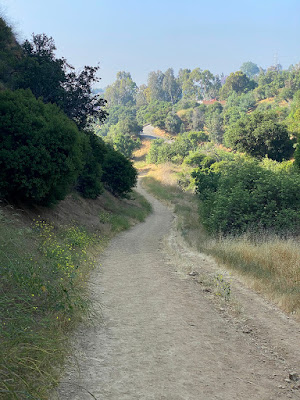 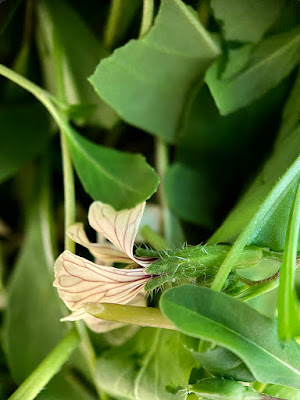 I know: I shouldn't have let this arugula start to flower ... it's a sure sign that it's a few days too old.  And whilst the leaves were wonderful and peppery, the stems - stalks, even - were a little bit too tough.  I should mow the rest of it, with scissors, tomorrow; rescue the tasty leaves; and let this particular effort at pandemic farming resuscitate.

A million years ago, in the spring of 1977, I was a graduate student in Florence, working on politics in late nineteenth century Italian art, and living briefly in an apartment on via Orsanmichele.  None of us had any money: some were graduate students - in art history and architecture; one was doing his servizio militare through working in an old people's home; a further, but overlapping group in the apartment above were very involved with Lotta Continua ("Lotta Continua, Libertà e potere non vanno in coppia"), a radical Marxist group that seemed extremely exotic at the time.  There was a mild ongoing tension between those of us who were also involved in feminist activity - especially around abortion rights - and the guys.  Mealtimes involved (a) going across the Piazza della Signoria to Trattoria Anita, where we were treated generously, and like family, or (b) pasta, or (c) a kind of omelette sandwich, with fresh crusty bread, and an extraordinary spicy salad leaf.  What is this, I asked, wide-eyed? "C'è arugula!"  I had never heard of such a thing.  I asked some more - and found that it was sold by various old ladies in the market, who came down from the hills with bundles of the stuff.  I bought it, thinking it the most extraordinary culinary discovery.  A decade later, I found packets of arugula seed on sale in Italy, and bore them home triumphantly, and planted them in our garden in Oxford.  Who could have foretold (maybe I should have invested, and made a fortune...) how ubiquitous it would become?  But I still can't resist growing it.
Posted by Kate at 10:05 PM No comments: 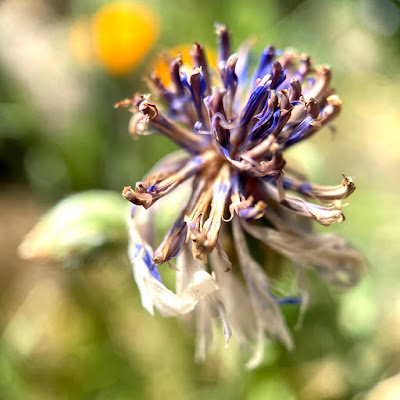 And today, some rather tired flowers: they, too, seem to have had their hours of daylight sucked out of them by Zoom meetings.  You'd have thought, perhaps, that the semester was over - but no, seemingly not. 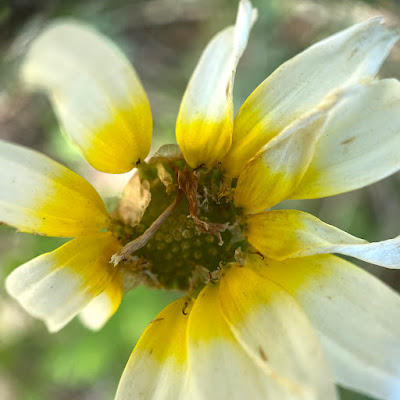 more from the wildflower meadow 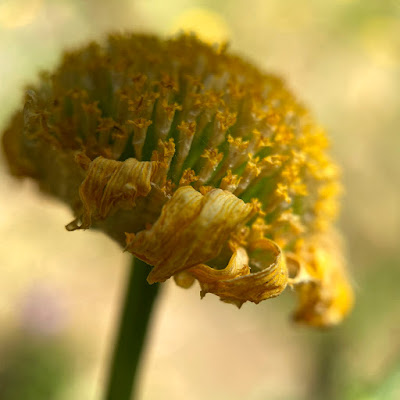 The flowers seem even more super-abundant today: I'll be gathering bunches and bunches of them before they're mown at the end of the week.

But lest I fall into the trap of thinking that nature is all beauty, there was a peculiarly repellent pile just above these.  Recognisable was a small heart, a lot of intestines, and an even smaller - maybe rat-size? - paw.  And unidentifiable gunk.  What happened?  A coyote?  One of our great horned owls (though of course they usually eat anything whole, and then pellet up a compressed version of what they can't digest)?  A red-tailed hawk?  I've certainly seen them demolish rabbits out back, but this seemed tidier.  Some combination of the above?  Whatever it was, be very very grateful I'm just bringing you pictures of flowers, and of Alice balancing on the slope above some of them. 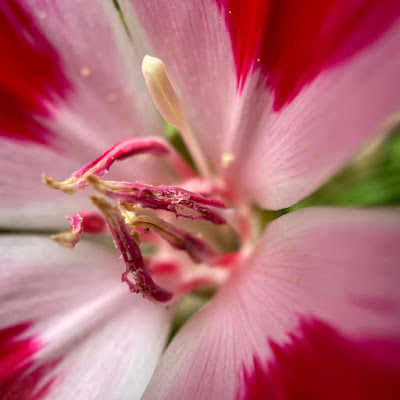 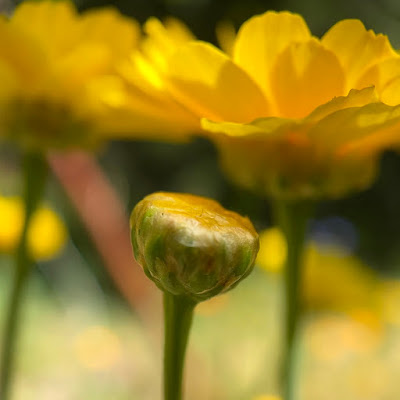 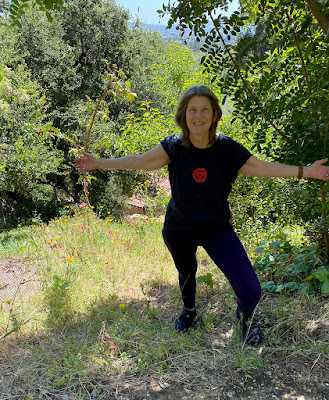