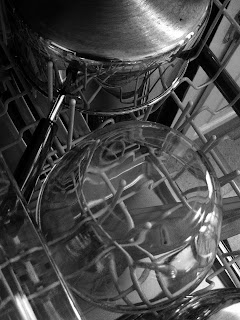 Truly, it's not fair to my Writing and Photography class to say that I will, indeed, turn my Facebook notes into a full scale blog - and not do it.   Which raises a whole lot of new questions about Tone and Audience, and the degree to which the style of one's writing shifts according to whom one thinks may be going to read it.   But I'll say once again, as I said in class, that for those of you who are writing your own blog as a project - this is not a How To Do It template (though I hope it's not a how-not-to-do-it, either...); you're not my only audience (though as promised, I'm going to try and make reference to the readings that we're all doing and discussing); and I don't see what I do here as academic writing (though again, it's hardly what I write in my journal, in emails to friends, or in FB status updates: one of the interesting things that I've discovered in the last 27 days is that this particular medium - both solipsistic, and aimed at anyone who's prepared to follow along - may well be producing a voice that isn't identical to that which I use in (text) published work.   Possibly that just means that my sentences are too long here).
By the end of today's class - largely centered on What Is a Photograph?, and understandably having fun with CCTV images, with Keith Cottingham's computer-generated/manipulated images of adolescent boys side by side with Jock Sturges' adolescents, with Joel-Peter Witkin's collage reworking of the gods/goddesses of Botticelli's "Birth of Venus" and the Renaissance Hotels ad featuring a photoshop composite (I think) based on the same painting

- we were moving towards asking the question that's uppermost for Thursday's class: why should the whole question of whether Photography is Art have bothered people so much at various times, and what do we learn about attending to the terms of this debate?   And tied in with this was the question of subject-matter, and (for me) once again, the photographing of the everyday.   One of the images reproduced in the Barrett text we were using was a black and white 1977 print of Jan Groover's pots and pans (we also looked at some of her work in color) - and prompted, rather than inspired by this to open the dishwasher and see what was inside, I made the discovery that it's much harder to take an interesting photograph of kitchen utensils than one thinks it's going to be.   For a start, how much does one want to re-arrange?   (not a dish or pan was re-positioned in the making of the above image...and this is perhaps why it's a bit stiff and boring) - but when I try again, it'll most definitely involve moving stuff around (as one would, after all, if one were a painter setting up an arrangement of crockery on a table-top).   But then, very quickly, what looks like the everyday turns into something quite different - a still-life, just like (as we saw) Daguerre's very, very early capturing of objects in his studio - very artificial, and having a much more complicated relationship to the everyday than it seems at first sight.
Posted by Kate at 6:57 PM