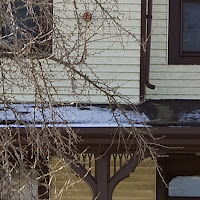 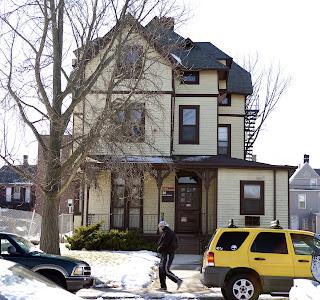 36 Union Street
I've been fretting about calling yesterday's table-footmen an example of deadpan photography: they seem a bit too quirky for that.   So I went in to teach today deciding, in advance, that today's photo would be as dead-pan a shot I could manage of the building that my office is in: taken straight on, not kneeling in any contorted position so that I could use a wide-angle lens to avoid the cars, not looking to make it picturesque in any way: in other words, to emphasize its ordinariness.
And then a person came along.
I went wrong, I think, in including the guy walking by: he un-deadpans it, introduces either the descriptive (he's hunched over - it's cold) or the potentially anecdotal (where is he going? what is he doing?).   It might make for a more "interesting" picture, in conventional terms, but the problem is, he's singular, and therefore one's attention gets drawn to him, not the house (unless that's just me obsessing about whether or not it was right not to have waited for him to have gone by).   It would have been quite different if it had been a full-of-people street scene.   I guess I didn't wait to take a second shot since it was cold, and I thought that this would be fine - and of course now, I wish that I had them to put side by side, and also that I'd taken a tripod - that would have allowed the extraction of miniature portions of the picture more easily, since the definition proved not quite all that my technical perfectionism dreams of ...  But still, the picture on the top left (maybe tomorrow I'll learn how to embed images in the substance of the post), may or may not have documentary evidence of Where the Raccoons Get In - it's been clipped from the middle of the larger image.
Deadpan or no - it's certainly a photo in which, apart from the compositional choice, there's very little of the photographer's personality put into it.   I think there would have been much more of a sense of emptiness without the figure, and that it would therefore have been much more powerful and suggestive.   Certainly the deadpan photographers who appeal most to me - Candida Hofer, Lynn Cohen - do wonderful things with emptiness, and work with the potential of the lives and activities that their vacant spaces have contained and might contain - without using any props of incidental figures walking by.
Posted by Kate at 5:22 PM