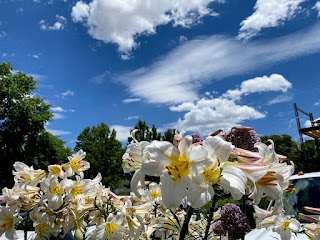 As I've often had occasion to remark (well, at least once a year), Agua Fria Nurseries is my favorite shopping destination ... and today I filled up a cart with enough plants to complete the garden planting: seven and a half weeks in which to enjoy everything.  I was very struck by the number of bees there today: someone nearby must reap wonderful honeycombs from their hives.
Or, to put it a different way, here's something cheerful (even though those lilies - planted out at the nursery - look a bit browning and wilted at the edges) to contemplate on a day of complete callous, backward-looking cruelty meted out by five of the Supreme Court justices. 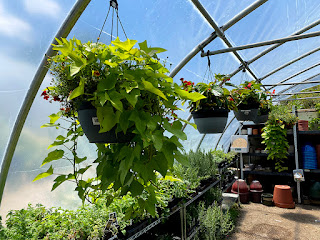 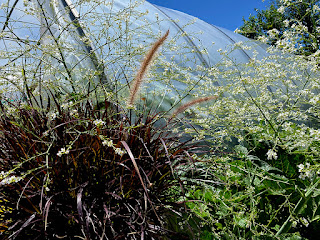 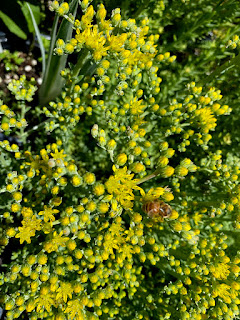 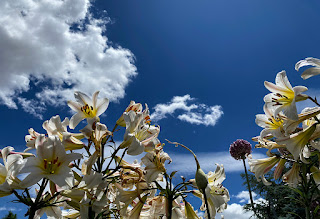 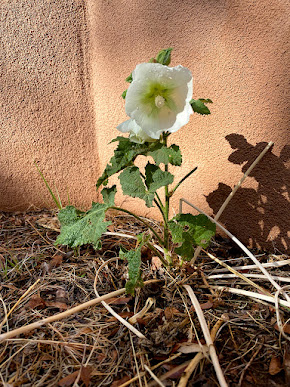 This spring and early summer has been so dry that a number of plants that I welcome as perennials - ok, a few plants, but they matter - just simply haven't appeared this year.  Chief among these are the irises - no sign of them having bloomed at all (although I wouldn't put it past the gophers to have chewed through their corms) and a tall hollyhock that has come up year after year (though last year, to be sure, it had been attacked by insects).  But in a corner of the yard - here's a small - a very small - brave hollyhock.
By contrast, since the rains began, self-seeded morning glories are springing up like aggressively climbing plants in a fairy tale ...
Posted by Kate at 8:58 PM No comments: 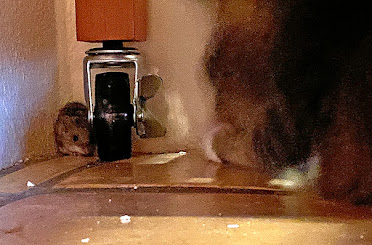 ... is, I hope, still alive somewhere at the bottom of our driveway.
I was eating my breakfast when I saw Gramsci trotting towards me with a mouse in his mouth - I thought it was one of his toy mice (let's call them "trainer mice," going forwards), waiting to be thrown - until I realised it had black beady eyes and a long tail and ... Grams looked very pleased with himself.  Then he dropped it, and it scampered off into the farthest corner of the room, under a wooden cart/side table.  Admittedly, this wasn't the best circumstances for a flashless photo, but this gives you a sense of the peril the mouse was in ... it then fled again; Grammy pounced - and the next thing I knew he dropped it again and it (wise mouse) was lying on its back in the middle of the hall, pretending to be dead.
So I scooped it up with the bowl-and-cardboard contraption we keep handy for centipedes (and mice), and (it was far from dead) took it down the driveway in the rain.  It looked a bit battered - but if this was the mouse that Moth caught-and-released a couple of days back that's been hiding out somewhere (and let's hope that's the case), it's had some nasty experiences recently in cats' mouths.  I was pleased Gramsci didn't use his preternaturally long teeth on it.  What a day for him!
Posted by Kate at 8:29 PM 2 comments: 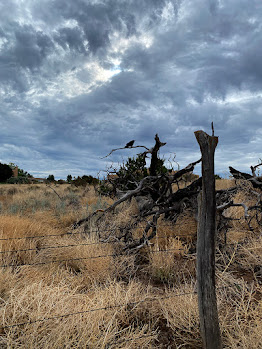 ... only today's promised/threatened storm never actually happened.  Maybe later?  According to the radar, we were bouncing around on the edge of Weather all day, only no thunder and lightning, and only a few rainy squalls, under grey skies.
Posted by Kate at 8:13 PM No comments: 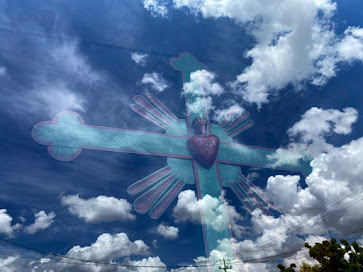 No, not a composite!  This sky is reflected in a shop window - the shop that used to be Casa, next door to Ohori's Coffee, off St Francis, and where I've bought lots of favorite things over the years.  Alas, it was a pandemic casualty.  It looks as though they may be selling off a few last things, and this cross was in the window (the shop itself was closed), and if I crouched down, and stood to the side, I could just capture it and the perfect sky, without including either my own reflection or (even more difficult) that of the cell phone.  Compositionally, I'm very happy with how the cross form of the telegraph pole manages to appear at the bottom of the turquoise cross's shaft: one of those fortuitous accidents one doesn't consciously notice at the time.
And yes, I know the whole thing is a bit as though it's put out by the Santa Fe Tourist Bureau - so was tonight's sunset, if you didn't happen to see my post to Instagram ... I think these are foreshadowing more rain tomorrow. 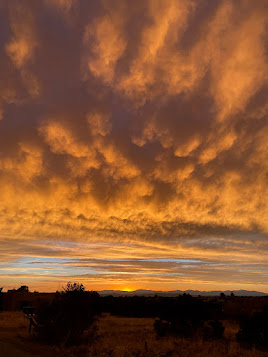 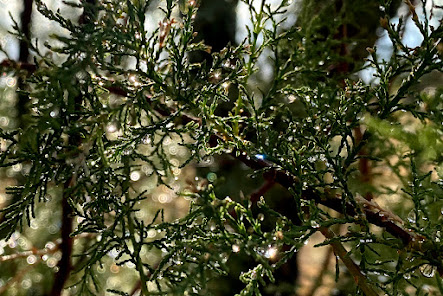 It's been raining on and off all day - wonderful! - but we managed to get out, nonetheless, for a couple of walks.  This evening, the tamarisk tree was dripping with very recent and large raindrops (I wish I'd had time to head back inside for a macro lens): it's a terribly ecologically unsound tree (it was here before I bought the house) since it guzzles up water, but this amount of rainfall might keep it going a little bit longer ...
Posted by Kate at 8:33 PM No comments: 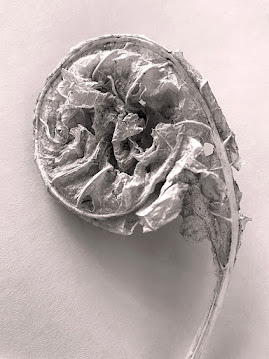 I found this dried and curled leaf - and a couple of similar ones - when I was tidying up the plant containers outside.  I think it must be a dessicated watermelon leaf - the only other possibility is horseradish (and to my disappointment, when I dug up the horseradish root, there was hardly any at all).  But I'm not sure - all that I know is that it looks as though it's been delicately carved in stone.
Posted by Kate at 9:20 PM No comments: