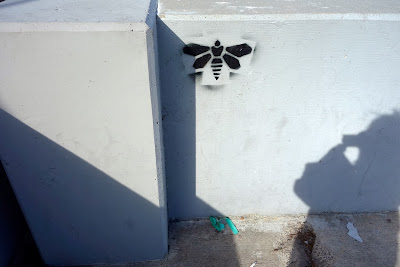 At least, I think it's a bee.  I need it to be a bee.  It's a new stencil that's appeared at the top of Parking Structure D, and it reminded me of being back in London nearly two weeks ago, where my father had spent nearly two days mending the boiler (he doesn't trust plumbers, probably with reason).  He seemed to think the problem was a bent fan - likely - caused (less likely?) by a bee having flown into it.  Probable cause or not, there was, indeed, a sad furry bee corpse, which sat in state in the kitchen for a couple of days, until my father respectfully buried it in the garden.  This, therefore, should be thought of as a bee memorial.