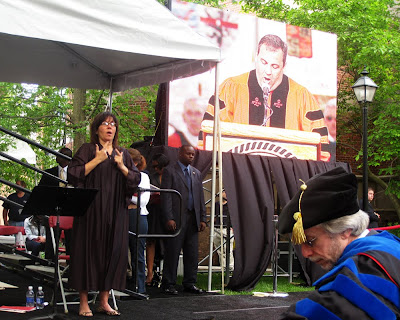 I am still mystified as to whom, exactly, the two signers at Rutgers commencement were signing to. It didn’t seem – though I could have been wrong – that any deaf graduates or graduating seniors were seated in front of them, and there were certainly no parents wh might have benefited from their rendition in view. Could they be being beamed to a separate screen? I doubt it – no obvious camera (one thinks that their role might have been more obviously useful if they’d occupied a small rectangle somewhere in the corner of the large screens that were transmitting the ceremony on a vibrant and enlarged scale. Mostly the cameras were focused on the speakers, but occasionally on the audience – o my horror I saw more than one appearance of myself (for I was in the third row, and Vulnerable) looking unappetizingly tired and blotchy. The interpreters, however, kept up energetically with their task, looking especially expressive when they were conveying the glee club imitating the bell of Old Queens.

In a fantasy world, they would have been offering a commentary on the bloated, bland apparition of Chris Christie. I guess it’s mandatory of the University to offer the new Governor an honorary degree. His speech itself was boilerplate, presumably cobbled together by some speechwriter with the aid of A Hundred and One Best Graduation Speeches: the value of freedom; the freedom to be oneself, to take risky choices, not just to be content with the familiar, to follow one’s passions, which might not be the same thing as one’s ostensible academic subject, to go off and be as creatively exciting as Bruce Springsteen (if only he’d attended his state university, and not Ocean County Community College). Yadda yadda yadda. What was far more interesting was watching his face when listening to other speeches (and does he really think that the audience doesn’t see him get bored and look at his program for a while in the middle of Eleanor Smeal’s words? The only time it broke into an attentive human expression was when one of the two student speakers attacked a certain TV show for ruining the image of the Jersey Shore.

There were surprisingly few boos and cat calls, considering. I restrained myself to non-applause. But I‘m pleased that my camera performed what’s at least a mild act of sabotage: the Rutgers red of his gown, when photographed appearing on the big screen, has turned into a strangely bilious yellow.