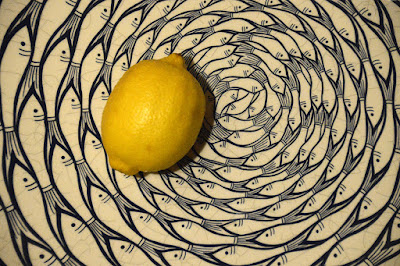 When I was 9 and 10, I took ballet lessons at Letty Littlewood's Associated Arts School, in Wimbledon (it was only many decades later that I realized that this had quite a strong reputation). And there, by a wonderful coincidence, my teacher was a Miss Lemon and the pianist a Mrs Fish. When I see the two in combination, now - which obviously is not seldom - I can't help but make the connection.

Although we were schooled for the usual Royal Academy of Dance exams, Letty Littlewood's was also - and probably best - known for teaching a Russian, and more free style method of dancing, which probably stood me in good stead later, when as an undergraduate I managed to get into various productions simply because of being able to dance in what passed as free style in the 1970s (most notably as a witch in a production of Faust at the YoungVic).  But at the time, my career was sadly curtailed when I just didn't feel able to take part in the annual dance show at Wimbledon Theatre with the rest of my Letty Littlewood class.  The reason?  I had sprouted fur in my arm pits.  I didn't know why; didn't know what to do about it; was curled up with embarrassment; kept my elbows clamped to my sides in all changing rooms, and - well, I could hardly keep on that grey knitted cross-over dance sweater (worn over a pink sleeveless tunic) in mid-summer, could I?  Miss Lemon couldn't understand why I wouldn't take it off.  So that was the end of that.