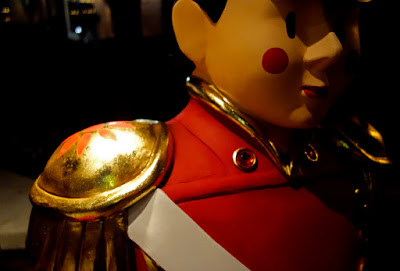 I promise you that this sentinel - guarding the Brightleaf Square shopping street in Durham - will not be this year's Christmas card.  Quite apart from its own saccharine blandness, I loathe the Little Drummer Boy carol, pa rum pum pum pum, rum pum pum pum, rum pum pum pum, with a loathing that is deep and passionate, and pretty much always have done (though I do recall once singing it in choir at school, and it's a satisfying number to sing.  I suspect that a good deal of this recoil comes from the fact that it's been so highly commercialized - not just because it's played over so many loudspeakers from now onwards for the next month, but because it's been recorded so many times.  I think that the recording I first heard - on Children's Favorites with Uncle Mac on a Saturday and Sunday morning, for example, on what was then the BBC Light Programme  - was the Beverley Sisters one, which was a hit in England in 1959; in the US, the recording that first headed into the charts - the previous year - was by the Harry Simeone Chorale.  But oh, the recordings I've missed, or tried to miss, over the years.  Most recently, Justin Bieber.  There were a whole lot of Motown Christmas records - by the Supremes, the Temptations, and so on - that inevitably had this on them.  I seem to remember the Joan Baez version - but I absolutely couldn't have told you that Jimi Hendrix did one.  Stevie Wonder doesn't surprise me, too much.  But Bob Seger? (a deliberately non-Christian version).  The Dandy Warhols, twice?  And, in 2009, Bob Dylan.  That last piece of information shook me to the core.