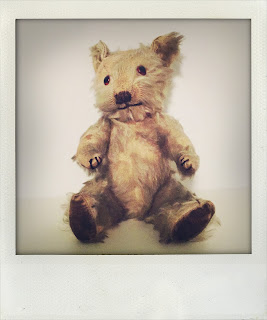 Bear is, I reckon, sixty, or more probably sixty-one years old this Christmas, and, well, looks his age. Somehow he epitomizes the bitter-sweetness of going back to my parents' over Christmas ... - very familiar, very poignant.   But it was a good Boxing Day evening - who would have thought that the highlights would have been playing a YouTube video of the Trojan Marching Band playing the USC Fight Song (complete with the Song Girls), and my mother unearthing a roneo-ed undergraduate magazine from Oxford in 1943, complete with poems by Philip Larkin and Roy Porter.

Oh, and if Bear's fur looks a bit ragged, that's because when I was about three, and had some nail scissors to hand, I was convinced that if I cut the fur, it'd grow again.  I excelled in magical thinking, even then.