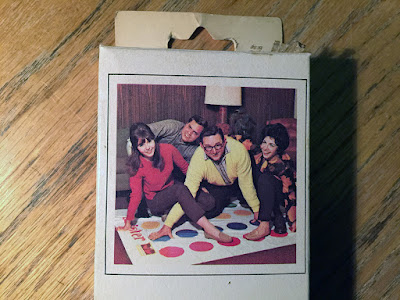 A triumphant eBay purchase arrived today: a box containing 9 Sylvania M3 Blue Dot flashbulbs (the original packet held 12).  After I'd bought them, the seller was so mystified as to why anyone should want these that he emailed me to inquire ... I explained that it wasn't the bulbs I wanted so much as the packaging, which wonderfully fits my argument about the association of flash - and flash bulbs - with modernity.  For here, on the packet, are four adults playing Twister - a game that was a prelude to goodness knows what.  I suspect that this dates the packaging to around 1966 ... I quote Wikipedia ... "Twister was submitted for patent by Charles F. Foley and Neil Rabens in 1966, and became a success when Eva Gabor played it with Johnny Carson on television's The Tonight Show on May 3, 1966.  However, in its success, Twister was also controversial. The company that produced the game, Milton Bradley, was accused by its competitors of selling "sex in a box". That accusation was probably because Twister was the first popular American game to use human bodies as playing pieces." 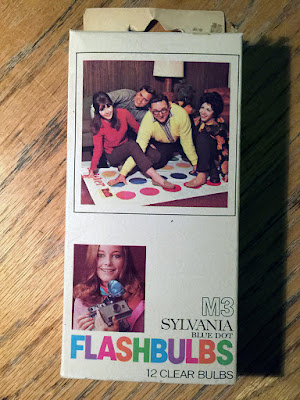