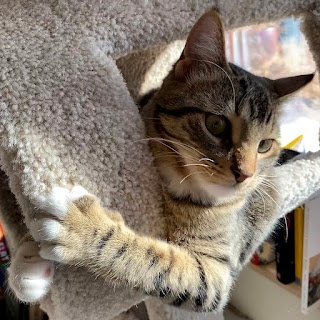 When I look back at those Cute Kitten pictures - taken four and a half or five months ago - in the very same Kitty Palace - this little monster is barely recognizable: so small, so adorable.  Now he's a very adorable adolescent, pretending to be a Big Fierce Cat.
One of Gramsci's many virtues is that he's utterly unlike any other cat whom we've ever lived with - either of us.  He's very much his own self.  As yet, he's not yet living up to the intellectual potential of his name, but I'm sure there's time.  Given the nature of his attempts to "play" with Moth - leaping onto her, and getting bucked off - and his obsession with a toy stuffed buffalo, his future probably lies in the rodeo arena.  Or maybe a pin-up star. 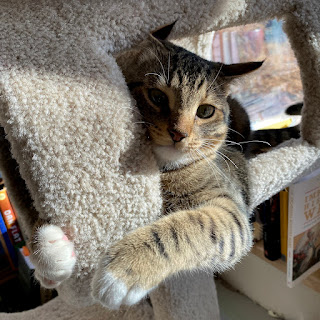