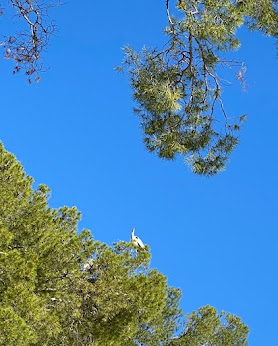 The herons are back! at the Silver Lake reservoir.  Admittedly, when the reservoir was being drained, they only moved locally, to a large fir tree down the road - but now they seem to be back in force.  There are two here - one sitting on a nest - but at least two other trees also have occupants.  They are Great Blue Herons, and although not especially blue (they have dark grey wings), they are magnificent - the largest herons in North America.  We saw one male flying back to the colony - the males gather twigs; the females do the actual building - and they take turns in incubating the pale blue eggs, which seems only fair, since this takes 25-30 days.  And then they both feed the little heronlets, through regurgitation (and they don't just eat fish: lizards and mice and other rodents (even gophers!) and little birds - I'd always thought of them as pescatarian, but the heron dinner table seems to be much more varied than that.
Posted by Kate at 9:12 PM