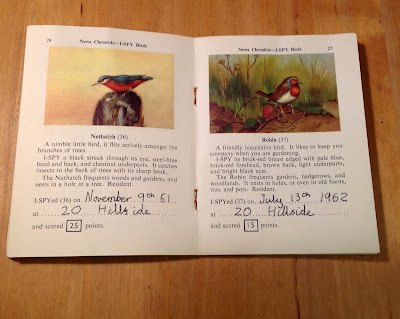 The British newspaper The News Chronicle - very much a working-class paper - used to put out a series of books called I-Spy ... in this case, Birds.  I also had I-Spy Horses and Ponies - of course - On the Road; On the Farm; The Unusual, Trees, and History  and probably others besides.  They cost between 6d and 1s, depending on how much color was in them, and one had to write down where one saw the object in question, and score points according to its rarity value.  "It will be a red-letter day when you reach your 1,500 - or even your 1,000 points."  A teacher or parent had to sign to authenticate, and then you had to send in the booklet (with a 3d stamp for its return) to "Big Chief I-SPY / NEWS CHRONICLE Wigwam / London E.C. 4."  I wish I'd remembered this when I wrote The Transatlantic Indian - proclaimed my membership of "THE GREAT TRIBE OF REDSKINS," which would also allow one to read messages in secret code printed in the News Chronicle.  These seem very, very distant times.

The robin is for Alice - a kind of public Christmas card - since she's so very taken with the English version of the bird.