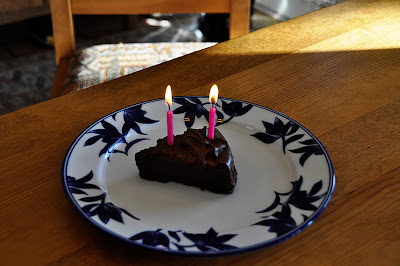 Doesn't everyone buy or bake their blog a birthday cake?   Happy 2nd birthday, FTBL!   (when someone referred to it thus in an email, it took me a long while to work out that this wasn't some abbreviation referring to my strange compulsion to watch Rutgers' football team being beaten yet again - at least this year we've been spared trekking through the cold southwestern weather to an empty sports bar in order to watch some minor bowl being contested).

A year ago, I wondered whether I could, really, continue for another year, and yet knew I couldn't quite stop.   Two years in - I think I'm not quite as maniacally distressed if I can't post absolutely on time (viz last night's power cut) but have, in fact, done so about three hundred and sixty days of this year, with a few straggling numbers.   It's been an odd year from the point of view of writing, since I've not been teaching a photography course (nor will I be, again, till the spring of '12), nor doing as much photography research as I would have like - even if the Flash! book has gathered steam again, most of this year has - academically speaking - been devoted to dragging the Victorian volume of the New Cambridge History of English Literature to what are now, I hope, the last wheezing gasps of the copyediting stage - and whilst that will be most satisfactory when it is, say, in proof, it's hardly conducive to musings about the visual.   Only the "Memory" course that I taught this last semester has really forced its intellectual way into this space, and that, perhaps, not as often as it might have done.

And when it comes to photography - my only real advancement has been falling in love with alternative processes, especially albumen printing, which has hardly found its way here.

And what I have learned, is that although in some ways this reads like a journal, a meditation, a more or less style-polished-on-a-good-day piece of writing; a piece of writing that usually reads as personal, rather than otherwise - I rarely let rip on the political stuff that I talk about in real life, despite the maulings of Higher Education at the hands of New Jersey - and other states - and the new, far from glittering British coalition.   But then, nor do I talk much about the truly personal - chairing the department for half the year?  Not chairing the department for the other half of the year?   Going through the whole anguished business of whether to accept a new job or not, complete with all the tussles of loyalty involved?   All of this seems to have been channelled around, or through, a few cryptic remarks (though I know I have readers out there skilled at reading between the lines), and via the ongoing (well, stalled) saga of trying to sell the house.   Curiously, in all of this, I think I've learned something about the emphases and evasions of memoir writing, let alone the blogging challenges of writing for a largely unknown audience - yet one that's simultaneously private  - in that it includes family and close friends - and public at unsuspecting moments (when being introduced as a plenary speaker, I've found my introducer can know a good deal more about my life than I'd bargained for).   Of course,  by and large, everything that goes up here is Public.

So thank you, loyal readers - and thank you for putting up with the busy days when, at 10.30 at night, all I can find is a drooping flower or a kitty with luminous eyes, and can barely stutter out a sentence or two of commentary.    It's fun, even when it's hard work; it takes me out of myself - sometimes when I most need it - and I'm heading into Year 3.
Posted by Kate at 8:57 PM