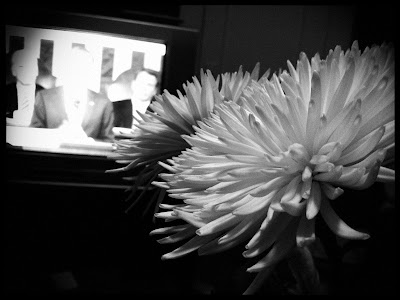 Photographing television is always a strange gamble, but never so strange as when it bleaches out our president.   Or maybe it's some kind of celestial, luminous light coming off him?   Though his measured, reconciliatory, let's rebuild the Greatness of America speech didn't exactly shimmer with incandescence (though I've just heard Barbara Boxer describe it as "visionary and inspiring"), even if, from another point of view, I can't imagine too many people (even if Tea Party spokespeople staring into the wrong camera) thought that he hit Roswell scary territory.   Nonetheless, visually, this is unmistakably ET stuff.
There was, however, very little in this speech for the humanist (unless one's meant to head off and analyze Google and Facebook, which were put forward as recent examples of US entrepreneurship and inventiveness) - much praising of education, much exhortation to go off and be teachers - but, it would seem, of science and technology.   It's interesting, though, to speculate how he could have worked in the importance of reading and thinking and exploring language and using one's imagination and playing an instrument and and and and etc.  (though the speech itself was an example of how one builds, quietly, on examples from history) without sounding fusty and / or elitist.   It would be so wonderful if he were to work on this for next year ...
Posted by Kate at 9:24 PM