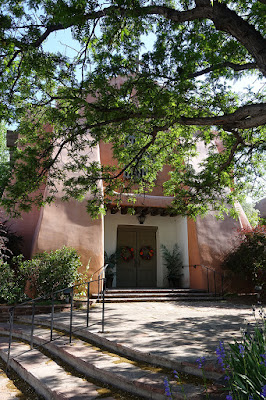 It's striking how changing one's familiar territory even by a couple of streets makes one see completely new things in a city that one thinks that one knows very well (after all, I've been coming to Santa Fe for, gosh, twenty two years, now).  But the O'Keeffe Research Center is in a little part of town, to the northwest of the Plaza, that I guess I drive through when looking for parking, but I'm not used to walking around.  And there are some really old and pretty structures.  This is the First Presbyterian Church - founded in 1867, and the oldest non-Catholic church in either NM or Arizona (not the first to be founded, though - it itself was built on the ruins of a failed Baptist church).  The first structure was adobe; this is - according to the history - is red brick, underneath.  It's had a slightly uncomfortable history as a building - it caught fire in 1907, and the organ was inadvertently electrified in 1921.  Really, I'm slightly shocked not to have registered its presence before.