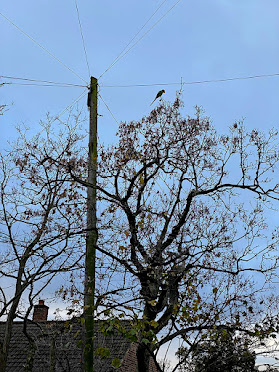 I went up the road early this morning to fetch my father's copy of The Times, and when I returned there was a parakeet sitting on the tree at the front.  And then - a whole flock of them in the trees in the garden.  Of course, I still - and with considerable reason - think of them as a very invasive species, but I guiltily enjoy the bright green flashes of them that have now been around for - for how long? - twenty or thirty years, maybe?  My mother, whose eyesight became increasingly dimmed by cataracts (on which she could never be persuaded to have an operation) always flat out denied the parakeets.  She claimed that she'd never seen one - even when one swooped, greenly screeching, across her line of vision.
All the same, I owe my mother an apology.  In the weeks before her death three years ago, she maintained that she'd heard a choir singing in the garden - a beautiful choir, singing "Silent Night" and, I think, other Christmas songs and carols.  This seemed like a very benign, and very soothing aural hallucination.  We should all be so lucky.  Only ... at the end of last week, I heard the same glorious singing.  But rather than thinking the angels had come for me, I realized that it was the Wimbledon College School Choir practicing for their Christmas concert/services (the College is one garden away behind our house).  I'm so glad that they must have been responsible for giving my mother pleasure, wherever she thought it came from. 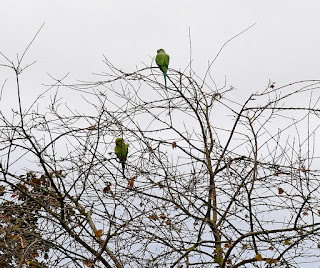