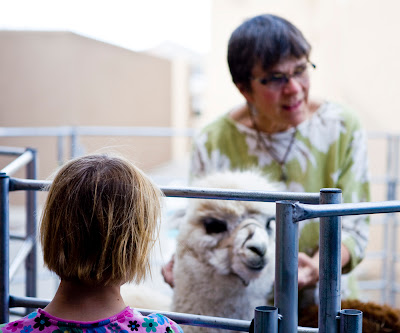 One of the two commercial areas in Eldorado is called La Tienda - "commercial" is a hazy word, here, since although there's a restaurant and a brewery and a music performance space and a gym and a furniture consignment store, there's also a for-charity second hand bookstore, an art space, and so on.   All the stores here are locally owned, and there's a huge amount of support for community events (the Friday farmers' market takes place in the carpark, too). 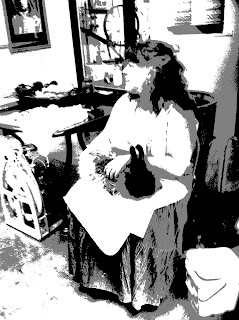 Today the art space was the site of an exhibition by local weavers - some of them very impressive, although I have to say that most impressive of all was one artist who seemed to have countless strands of fabric woven into her own hair into a complex fashion (sadly, though I stalked her down, I didn't have a flash, and the picture is seriously under-exposed).   But the stars of the show were on the outside of the exhibition - the suppliers of the raw material - a couple of alpacas, from down the road; Sophie the angora rabbit, with adorable long black ears (without a flash, indoors I resorted to my iPhone - this is the Manga setting on the Dynamic Light app - note the spinning wheel in the background), and then Sammy the miniature horse.   Not a pony, a horse, his person emphatically said, which is a little confusing to those of us who think the difference is a matter of size - 14 hands 2 ins at the withers - but anyway.   And I have to say, I've seen smaller miniature equines - Falabellas are certainly smaller - but he was certainly doing a good job at putting up with people who didn't quite know what to do with four hooves.   I haven't a clue who this woman was (and she has the expression of someone who is very dubious about having her photograph taken) - so maybe this counts as a form of street photography? 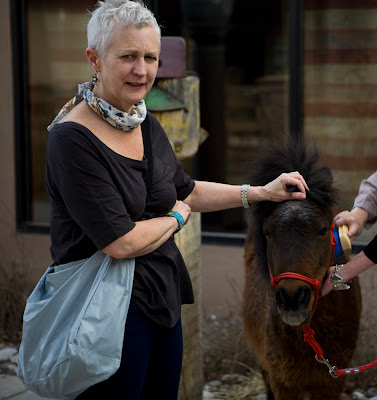