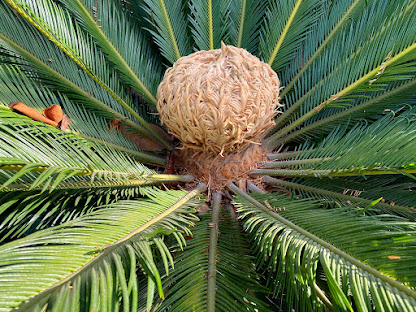 This is a flowering sago palm - cycas revoluta - which isn't actually a palm at all, despite those feathery leaves, but a cycad.  Cycads have been around for a very, very long time - fossil records take us back to the early Permian period, 280 million years ago.  That's before dinosaurs, by a long way: there were starting to be land creatures like small lizards, and insects and beetles began.  Most of the cycads today are species that came into being a mere 12 million years ago, however, in the Mesozoic era, which is very much when dinosaurs were romping around - so this would be their backdrop.  This is a female flower head - compact and roundish - the male flowers are unarguably phallic.
So that (apart from all the building work going on in the neighborhood, providing daily changes to speculate about) was today's distraction.  Somewhere in Ontario our car is still sitting.  Supposedly, its necessary part has turned up - but all of yesterday's fervent promises have melted away with the fact that it was "our" service manager's day off; promised phone call to keep us up to date never happened, and so on.  We are grinding our teeth in frustration; we bought Moth a catnip banana and other treats (including a new, un-peed-in carrier), and wish that Lexus would do the same for us.
Posted by Kate at 10:00 PM