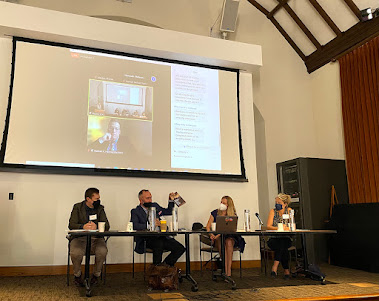 It was so good to be at a genuine live event today - at UCLA - a roundtable to celebrate the publication of Liz Miller's brilliant new book, Extraction Ecologies and the Literature of the Long Exhaustion.  And the great thing about being on leave is that I've had time to read it since it turned up on Tuesday!  I'm full of admiration for all that it does: it argues for the impact on fiction of the late C19th and early C20th extractive economy in a way that goes far beyond saying oooh! look! Here's a mine! - or even a reference to coal or precious metals.  Liz relates C19th anxieties about finite resources to fictional form - realist fiction, adventure fiction, underground fantasies - in ways that make one rethink the work that genre does (they were, of course, ironic anxieties, since for now there's far too much fossil fuel down there, and it's the cause of so many of our environmental problems).  And she also links this to our current fears and epistemological terror when it comes to thinking about futurity, and speculation (in all the senses of the word).  In other words, it doesn't so much as grapple with the big question of how we write historically based criticism, but why we write it - although its very existence is testimony to "how," as well.  Like Liz's earlier books, it's a deft display of someone knowing their subject, and the ideas and critical thinking behind it, so very well that she moves so easily from the big historical picture, to the intellectual issues, to close readings, and then back out again: quite simply it's a model of how to do it.
What was particularly excellent today was not just that we got to celebrate the book and (as Devin is doing here) wave copies of it in the air, but the presenters - Devin Griffiths, Susan Zieger, and via Zoom, Nathan Hensley - had been asked to talk about their own work in the light of the book, rather than plunge headlong into the book itself.  This was a terrific move, because it meant that one could see how in practice one could use Extraction Ecologies - over and beyond admiring it, that is.  I'm sure some of you were there in virtual form: at one time there were 80 people on line, which is probably 8-fold the number in the room.  But it was so very, very good to see people, and to feel that in-person academic life can, indeed, happen again.  And I certainly came home absolutely invigorated.
Posted by Kate at 11:06 PM