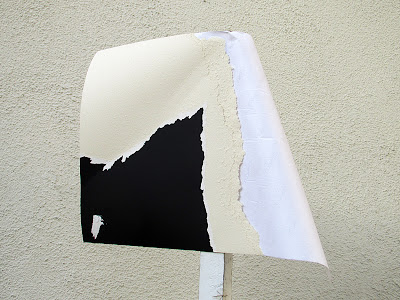 Whilst this works, in a stand-alone way, as a beautifully reference-less abstract placard standing outside Taper Hall, it also signals, for me, sad silence.  I'm so glad that I got to meet - if very briefly - Adrienne Rich, and to have dinner with her before she read at Rutgers two and a half years ago.  I've never reposted a blog entry before, but here's the picture that I took of her that evening, and what I wrote in homage then.  I don't have anything more that I can say, apart from feeling so extraordinarily sorry that someone whom I admired so much, and whose writing taught me so much, is no more. 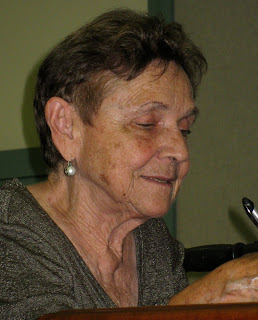 to Adrienne Rich, who read at Rutgers this evening - or more precisely, read at Douglass College, where she taught for three years in the 1970s. For me, one of the highlights of this evening was being privileged to be at a small dinner party there, with Rich and others reminiscing about this time - which, in turn, reminded me very strongly of the women's college background in Oxford where I was a student around the same time. Rich read both from her last volume, Telephone Ringing in the Labyrinth, and (which I liked better - more of the terse, angry, committed, poignant voice that I so strongly associate with her) some new poems. But this photograph, for me, is spoken to by a line in the first poem of Telephone about "Secret codes of skin and hair". Although I've ended up posting a relatively conventional portrait (book-signing, although one could always pretend that this was her engaged in a more imaginative form of composition), I spent some time cropping and wondering about posting little segments of forehead and hair, of ear-lobe and neck - in other words, the quiet, unnoticed private areas of a person: not what one would focus on if one were talking to them; not what one would oneself (I imagine) focus on if one were looking in a mirror, but parts of a person that are both public and exposed, and yet, because unregarded, often surprisingly, disarmingly, intimate (like looking at the back of someone's knees). And yet, to be playing around with facial segments in this way felt surprisingly invasive, as though the picture of the body part was somehow far more stolen than commemorating the public, performative face.
I was, it goes without saying, absolutely overwhelmed, grateful, and overawed to meet someone who's been such an inspiration - in human, intellectual, compassionate, justice-seeking, feminist, poetically-moving terms ever since I first read her, way back, indeed, the 1960s - though I didn't know then, of course, how much everything that she was to go on to write was to resonate round and round my consciousness, and how influenced I would be by her passionate commitment to memory, history, seeing, and feeling.   [September 23rd, 2009]
Posted by Kate at 10:04 PM