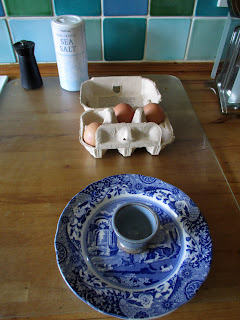 Sunday morning, in Wimbledon, is Boiled Eggs morning for my parents - one for my mother, two for my father.  Here they are, awaiting their fate.  Only whereas most of us are quite content with boiling our eggs in a saucepan, he has, for whatever reason, decided to purchase, and use, a cheapo Made in China egg boiling gadget.  As my mother points out, this is a device that fails (understandably) to take account of the fact that not every egg is the same size.  It also seems to involve complicated things like making a very small hole in one end of the egg.

This gadgetry is the more peculiar when one considers that my father isn't one for kitchen equipment, on the whole.  Alas.  The terrible flimsy cheapo Made in China coffee maker (like a Mr Coffee) has given up the ghost.  He was never interested in the wonderful stainless steel Porsche coffee maker that stayed in the Oxford flat ("doesn't our properly").  Now, rather than doing the sensible thing - going to John Lewis, buying another cheapo substitute - he has rigged up a dreadful contraption, that involves pouring water into the old coffee filter (it runs at a galloping pace through the ground coffee), which in turn stands in what looks to me suspiciously like the plastic funnel through which we used to pour paraffin into an upright heater in c. 1959, which in turn stands in the old perspex coffee pot, which in turn stands on a very low heat on the electric cooker.  I just hope someone forgets, and turns the heat up, and the whole thing cracks, and irrefutably needs to be replaced, and drinkable coffee will again be found at No. 20.  "No," said my mother, "don't even THINK of going out and buying one.  It'll be WRONG."