a leonine (and jaundiced) view 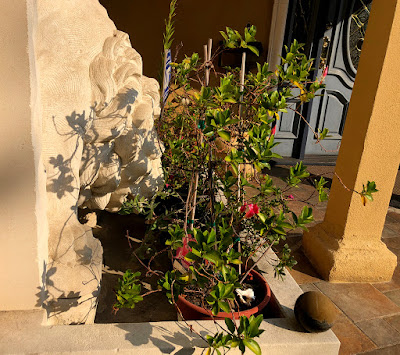 Here's another of the not-so-Venetian lions that decorate some of the houses in the roads around us.  This one looks very much as though he should have a fountain stream pouring out of his mouth - but no sign of it.  It was a cooler Saturday morning; everyone out seemed in a good mood; everyone said Hi or Hello! or ¡Hola!, depending.  I couldn't help but contrasting this with my father's daily effort to get a Hello! out of everyone - or a Good Morning! - as he heads up his street and along another block and a half to the Co-op (the newsagents that had been there on the same stretch for five decades or more having gone belly-up with the advent of said Co-op).  Five decades?  Why does one think that one's own memory somehow equals historical stretch?  I find, with a little digging around, that Jenkins the Newsagent was in fact started in 1880 by Edwin Jenkins, whose brother Henry was already running a grocer's on the opposite corner - which later became Cullens.  That makes me very very sad that it's now closed, and it's probably worthy of a post all to itself when I'm next back.  Perhaps its very demise signals a lack of neighborhood; the same lack of spirit that makes my father feel as though he's had a triumphant outing if he's successful, even in a small way, in his mission to get the world to acknowledge another human being.