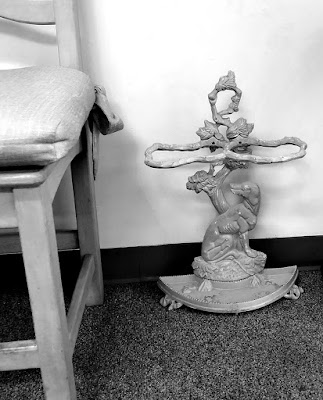 Back at the acupuncturist today, for Alice to have needles stuck in her, with some apparent effect, I'm glad to say.  I gritted my teeth, and concentrated against all the distractions, and managed to get some work done - a report written - but fell foul again, despite myself, of the lure of the distracting tchotchkes.   This would seem to be a greyhound, seated at the base of a complicated tree trunk: had it been cast in bronze, it would have looked like an escapee from the Antiques Road Show.  I realized, eventually, that its mysterious loopy form probably spoke to its identity as an umbrella stand.  It's hard to think of anything that we're less likely to need in this hot and dusty (or ashy) weather.