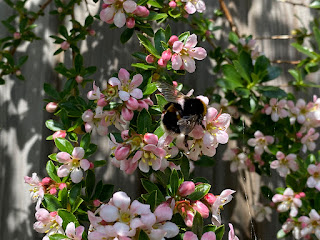 My truly favorite pic of the day - a bee gathering pollen.
But apart from that - it was a strange day to be in London; a Thursday Bank Holiday - the first day of the Platinum Jubilee celebrations - the Tube full of people with Union Jacks and flowery dresses - and much decorative bunting.  This was at the bottom of Denmark Road, which had a street party in full flow ... 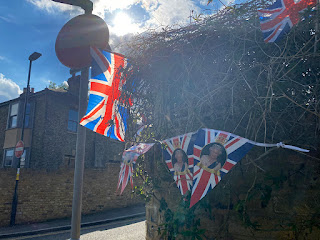 My initial plans to go to Leamington Spa and the late Pre-Raphaelite show there today fell completely flat, because it was closed for the holiday - grrrrrrrr - so I went instead to the William Morris gallery in Walthamstow.  WM would surely have had something to say about the incongruity of standing outside the house and watching the Jubilee fly-past in the distance (before heading inside to consume a very good sandwich of haloumi and red pickled cabbage on ciabatta: try it).  In the very, very far distance you can see a Spitfire.  A little later the 7 formation flew past - the 0 - was coming from the south, but they joined up into 70 to fly up the Mall; and then the Red Arrows. 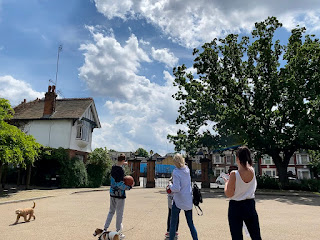 I wanted to see the show by the Trinidadian-British designer Althea McNish (1924-2020), who was extraordinarily inventive in textile designs: what's been shocking to me since I first read about the show was how unfamiliar her work was to me - despite being very much on display in London in the 60s and 70s. 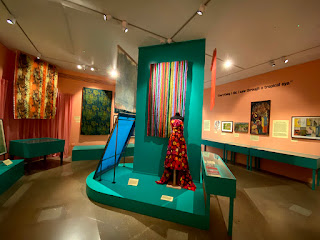 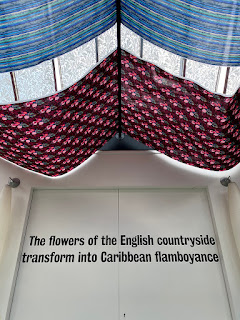 But not having been to the gallery itself since I was a grad student, it was excellent to see how well it's now curated - it really tells the story of Morris, and of course they've had many more objects donated to them since I was last there.  They do a terrific job in showing process - designing, weaving, printing.  And I really liked this William de Morgan music cabinet, flanked by some of his pottery. 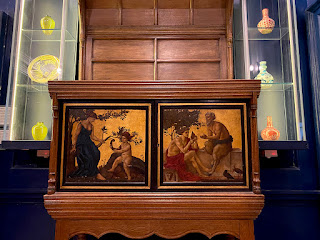