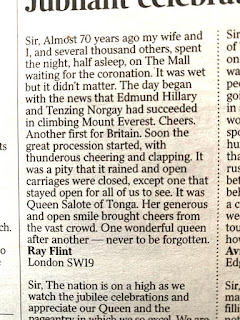 My father had the lead letter in The Times today.  Happily it had been copy-edited, and no longer read "and some person called Tensing."  What he leaves out is the next bit: he and my mother went home to their rented flat, and drank - atypically - a celebratory bottle of wine: a very bohemian gesture.  I was born in February 1954.
The spirit of Empire is still alive and well in some parts of the Jubilee celebrations, although tempered with a sense of genuine gratitude and pre-emptive nostalgia: it's made me understand much better why there was so much fin-de-siècle gloom hanging round Queen Victoria's Diamond Jubilee (plus, of course, the fact that 1897 really was the fin of the siècle ...).  This young sheep, at Wimbledon Station, seemed untroubled by such feelings, however. 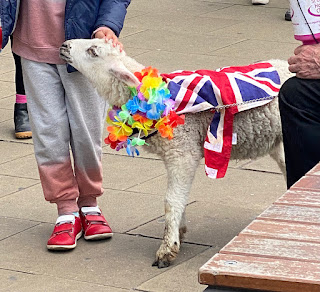 Some local houses are decked out as if for the relief of Mafeking. We didn't watch much of the Platinum Jubilee concert this evening (my father claims to be a "fuddy duddy" and not to care for Modern Music), and went to sleep during Diana Ross's closing set: instead we watched a 1944 David Lean film, This Happy Breed - an adaptation of a Noel Coward play, and really excellent as a family saga/social history of suburban London 1919-1939 (shot in technicolor, and with an excellent tabby cat) - and thoroughly worth seeing, if you don't know it.  But we turned over to live TV just in time for the green section of the performance - David Attenborough, Prince William, etc - and the front of Buckingham Palace lit up then - as throughout - with a quite exceptional set of projections and light shows, and then lit drones giving us - among other things - a corgi and bone ... 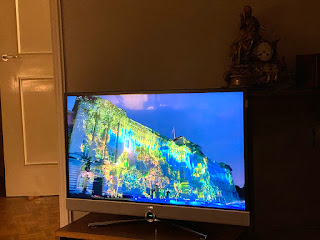