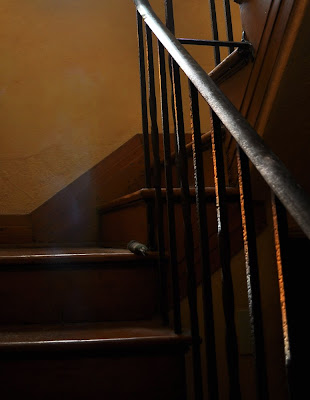 this is the corner of the stairs at 962 N. Hoover St., and on the stairs is a small, battered, grubby, green and white stuffed sock.   This is Lola's crying sock.    She has just deposited it there, after one of her daily - sometimes even more frequent - yowling fits, executed with it in her mouth, or crouched over it in a desperately depressed posture.   But what does this all mean?   Is it a protest against the state of the universe, or a wail of despair at the muse deserting her?   Is it a complaint against her arthritis - but then, why the sock? - or a howl of longing for the kitten/phallus that she never possessed?
As a photograph, it's also a homage (though I didn't realize this until after I'd taken it, or I might have gone to more trouble to avoid the strange reflection that crept in on the half-way stair, like a ghost balustrade) to Jeff Wall's Odradek, Tàboritskà 8, Prague, 18 July 1994  - itself an interpretation of Kafka's strange short story, "The Cares of a Family Man."   In this story, in Wall's photo, the Odradek is the strange, indeterminate object that exists under the stairwell.   It's not quite clear whether it is animate or not, whether it has a consciousness of its own, whether it  can move of its own volition, whether it's some rather solid incarnation of a malevolent dust bunny.   It is also, in Kafka criticism, often understood as an object that stands for indeterminacy itself, and by extension, for our anxiety to invest things with ontological certainty, with meaning, with an identity that we can recognize or a purpose that we can understand.
Lola's sock is rather similar.   Although it possesses no agency of its own - it's unmistakably the possession of a rather gloomy, if dear, tabby and white cat - we find it very hard not to invest it with the meaning that we want it to have for her - to make sense not of the shabby damp textile itself, but of her inner feelings, her desires, her grief, her being.   Yet, like the Odradek, it remains an object that, ultimately, stands for unreadability - in this case, the inscrutable nature of cat psychology, and the deep desire that we have to project onto her human emotions in an attempt, I suppose, to deepen yet further our attachment for her rather puzzling self - not to mention our sentimental delusion that she should feel flattered to find herself, just for once, written about alongside Jeff Wall and Kafka.
Posted by Kate at 11:52 PM