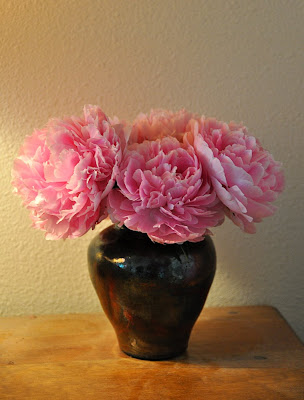 I'm relaxing my discipline this evening - it's a Saturday night, and the annual passing-through-Eldorado of the Pride Train, complete with rainbow banners and balloons, always puts me in a good mood ... I'd intended to go out and photograph it, but was out by an hour in my timing.   So, two pictures - exemplifying a typical dichotomy: the pretty picture, about which there's nothing much to say, and then, one of the other kind.   Meredith asked the other day on FB whether one could have too many peonies - she was, I'm sure, talking about her yard, not her bedside table, but waking in the grey rain this morning, her comment was the first thing that I thought of when I woke and saw these, and thought no - not possible to have a superabundance ... so, Meredith, this one's for you.
The reality of a wet day shows up well here, but it should be very good for the herbs - ours, and these. 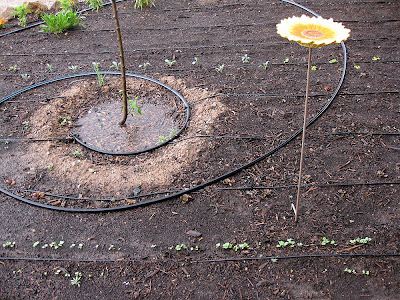 These are planted outside the latest very-near-to-Eldorado culinary acquisition and temptation, Real Food Nation, just above where 285 joins I-15 - the junction with the Old Las Vegas highway.   The co-chef here used to be at the (now closed) Galisteo Inn: the whole establishment is devoted to local, organic, and slow food, and it's quite delicious.   The dark chocolate cupcakes with caramel frosting and toasted pinons should probably be illegal.
But this spiral and gridded lines of a watering system (even if not the strange hybrid - a cross between a fried egg and a sunflower - on a stick) had me thinking more about land art / art in a landscape.   To be sure, this shouldn't count at all - it's functional, and if Land Art is one thing, it's non-functional, except in so far as it gets the perceiver to think about space, time, and the relation between aesthetics and the environment - or, rather, because Capability Brown, say, did that pretty well, about the point of art at all.   I read today Erin Hogan's Spiral Jetta. A Road Trip through the Land Art of the American West today, which, despite its terrible title, has some very thoughtful insights into how one might respond to Land Art (and her description of her experience at the Lightning Field manages to convey its magic in an impressive way).   One of the points that she raises is that of whom Land Art is for - and how to assess the huge amount of effort (and expense) that goes into some of it, in relation to the relatively tiny number of people who see it, in its out of the way situations - however moved and inspired by it we might be.   This particular curve and set of lines, however, manage to symbolize exactly what RFN sets out to do - a respect for the beauty that can accompany the utility of growing food to eat.   I just hope that my rabbit doesn't make his way up there.
Posted by Kate at 8:58 PM