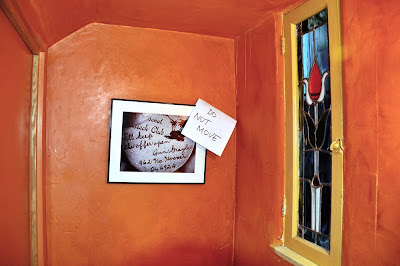 This is, or was, it: we've driven out of 962 N. Hoover Street. But this picture, of course, gets left: it goes with the house. The house was built in 1926. It doesn't actually turn up, by named address, in a Raymond Chandler novel, but it is, of course, perfect for the period. I keep hoping, and wanting, to see an old movie, and have it, looking rather surprised and young, come into view. Nonetheless, the address, and probably fictional phone number, appear in the movie version of Farewell, My Lovely.

This still from the film hangs in the downstairs bathroom - which we never used all that much, largely because it also housed the kitty litter tray. Oddly, when one looks at it, the palm tree logo on the drinks mat much resembles that on the logo of the Rubaiyat, the club in Ann Arbor where Alice was once a DJ - a logo that will be reproduced in her Hot Stuff: Disco and the Remaking of American Culture. Seemingly, generic Orientalism mingles with the generic West Coast. It's the palm trees.

This picture, therefore, stands out among the frames and frames that I took, just before we handed the house over to the renters. But we're so happy, for many reasons - despite the sadnesses of leaving, to be driving east ((tonight in luxury in Sedona, tomorrow back in Santa Fe).
Posted by Kate at 11:32 PM