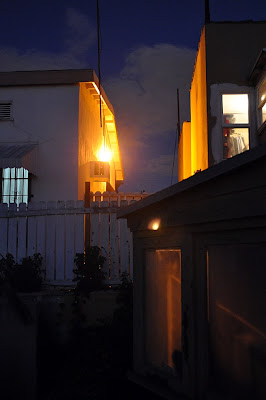 it managed to stop raining this afternoon/evening, so that we could eat out on the deck, and watch pink and grey tinted clouds scudding across the sky, the feeble flicker of flash lights from people taking photographs up at the Griffith Observatory, the Hollywood sign fading into the dusk.    That's hard to leave.
But if one turns in the other direction ... if one looks through the trellis at the back of the deck, one can see the little houses crowded on the hill behind us.   Which are fine when the inhabitants are quiet (and the ones on the left almost invariably are) - but the people directly behind are film editors - sound editors, that is - and can play the same loop of dialogue or street sounds or a door closing over and over and over again.   From this, one learns that sound editing must be a profession that requires extraordinary patience as well as a discriminating ear, but one wonders whether listening to it in practice mightn't have fitted well with the techniques used in Guantanamo.
And a little closer is the end of the walk-in closet that sticks out of the bedroom.   It looks best in the dark, since one can't see the peeling paint, and behind the paint there's - what?   For the wood is being inexorably nibbled away by termites - the house was tented and de-termited a few years ago, but the tiny little specks of termite droppings are back, and quite probably the whole rather ramshackle edifice is becoming daily more precarious.
I suspect that this is a photograph that would be the more effective if one knew nothing whatever about the context, however: if one could read it as suggesting urban proximity, each differently-lit room intimating, but not narrating, different activities that could be about to take place within it; the sense of night closing in on each house's privacy.
Posted by Kate at 10:58 PM