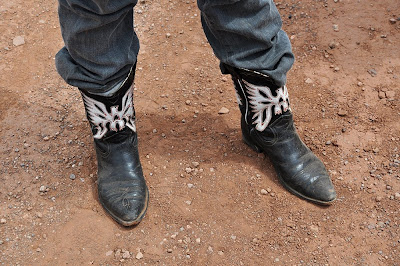 Today was very dusty: although Nina was lovingly anointing her new (that is, new 2nd hand) boots at lunchtime with olive oil, I had an anxious suspicion that the sandy New Mexican soil was going to adhere to them even more firmly as a result.
This sandy road was the way up to Star Axis - another piece of Land Art, another non-photographable construction.   I did, though, feel far more respectful of an art work that is in the midst - the long midst - of being built: it's a work in progress that, once finished, is designed to last for 26,000 years (the precession, so called, which is the length of the slow wobble that tilts the Earth's axis first towards, and then away from, Polaris).    Work in progress - however tempting - is not the same thing as a finished piece when it comes to photographing its effects, startling though its geometric lines, and its scale, were.   Whether or not the solar system will be the same, repeating itself in its cycles, at the end of that time, one can't exactly anticipate.   It seems likely - only I'm quite sure that the means whereby we record its motions (whether mathematically or representationally) will not.
In this context of time passing, the fact that Charles Ross has only been working for a quarter century on this project seems like speedy process.   Star Axis is a very different kind of work from Spiral Jetty or the Lightning Field, and a far less sympathetic one, to my mind.   This may have a good deal to do with the sun itself.   I would love to come back at night, and sit in the Hour Chamber, with the north star, Polaris, at the top of the 15 degree opening, and each star on the left-hand side taking exactly an hour to pass to the right, the east (most of all I'd like to come back at that time in August when the Perseides shoot through the New Mexican sky, and complicate this with their shows of burnt out light - August 12th, this year).   The Hour Chamber is at the front of the Solar Pyramid: behind it, is the Star Tunnel, parallel to the Earth's and intersecting with the line of the equator: a steep staircase rises above its bottom chamber, and according to where one pauses on the staircase, one will be able to have a sense of where Polaris was at that moment in history - a going up and a coming down, looking forward and backward, at once.
Looking in either direction today was a vertiginous experience (literally, if one suffered from such physical issues) - of course it would have been good to take out a camera, and capture the brutally angular and exact progressions of light and shadow.   What struck me most, in the bright mid-day sun, was the potential cruelty of the sharp sunlight.   Its long, thin, needle-like piercing triangles of light reminded me horribly vividly of the sun striking the column on ice at the end of D. H. Lawrence's short story "The Woman Who Rode Away," a phenomenon of the winter equinox that signaled the (self) sacrificial woman's deliberate, willed giving up of herself to - as one can read it all too easily - man's phallic (and desired) power.   Late Lawrence is very nasty, sometimes.   But here and elsewhere he gives one pause for thought about what sun worshipers are actually worshipping, and although Star Axis (as its name suggests) is hardly a temple to Ra or Tonatiuh, Charles Ross is fascinated with the sun in all kinds of ways: from constructing prisms through which light falls in meditative or healing places (for the most part one or the other - the chapel of Harvard Business School may currently serve both functions), to making Solar Burns.   To my mind, quite the most thrilling part of the day was seeing not just Star Axis itself, but some of the structures (though not the lenses) used to make the burns, and a number of sets in construction and arrangement in his workshop.   He focuses the sun's rays on wood - for the most part - for precisely nine minutes, the length of time that it takes light to travel from the sun to earth, and at different moments of the year, it performs different curves. He's using the same medium as the photographer, in other words, but instead of light being benign and enabling, he's bringing out its destructive qualities, too, and using them to create art.   This seems to be looping round, in my flash-obsessed way, to the tie-in between the necessity of light for image making, and the cross-over point in which it becomes murderous.
I can't find a way of looping back to Nina's boots, though there could be something potentially cruel about their pointy toes.   But I did want to reflect how wonderful it's been to travel - on and off - with fun, clever, creative people for the past few days, and I'm not sure that it's going to be at all easy to return to my habitual academic orbit.
Posted by Kate at 9:59 PM