last day in the old home 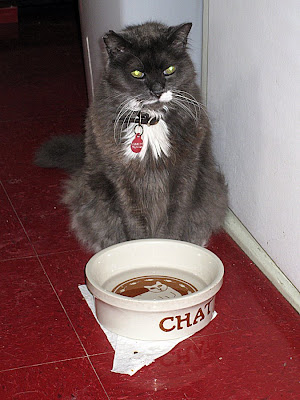 This was the day that the cats left 962 N. Hoover Street for good - for Santa Fe in the first instance.
Robert Martineau's 1862 painting, The Last Day in the Old Home, presents an early version of foreclosure, the bailiff repossessing the keys as the elderly grandmother peruses the apartments to let column of the newspaper; the profligate father raising a glass to the future with his son (an ominous indoctrination of the male line into unsound ways) as another sign of his ruin, the picture of a racehorse (gambling, gambling) on its side, ticketed for auction, showing yet another side of his ruin.
There's nothing like that symbolism here - just Emmett sitting over his water dish, looking, as ever, faintly malevolent - the  kind of patriarch who, if human and a Victorian, would be less likely to figure as the head of the household in Martineau's picture than as some out and out villain.   This sinister Emmett quality is one reason why I've allowed that rarity into my blog, a picture taken with flash.   One of the odd facts that I've learned since working on flash photography is that the reason that cats, when photographed by flash, don't show red-eye like humans is that they have (unless they are blue-eyed cats).   They have something called a tapetum lucidum at the back of their eyes, reflecting light back, almost like a mirror - we, on the other hand, have, at the back of our eyes - the interior surface that includes the retina - something called the fundus, which is reddish-black - and this reflects red back again because it doesn't absorb red from rays of light (no, it's not as simple as the horror-comic version - the idea that it's our red blood vessels that are shown up by red-eye - even though that's often stated in populist explanations).
Sitting, currently, on a bed - on the corner, befittingly - in Winslow Arizona - Emmett's (and everyone else's) eyes are currently closed, showing no apparent homesickness as yet.
Posted by Kate at 10:40 PM